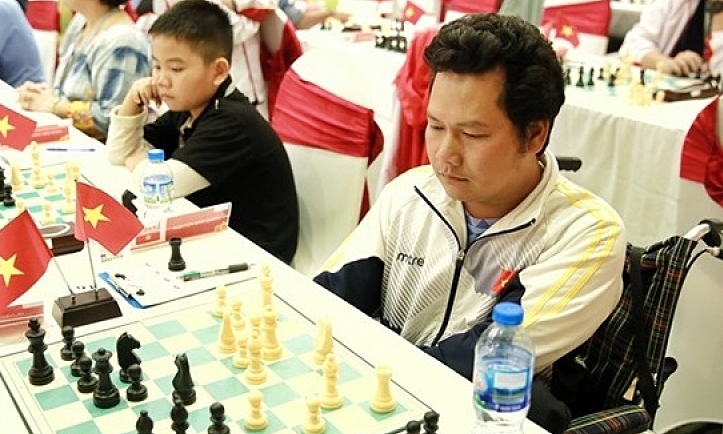 Quan (Elo 1783) beat Shashikant (2,182) on Monday night on the 54th move. The Indian player dominated at the start, forcing his opponent to spend more time on counterattacks. But the native of Kien Giang province patiently waited for the moment his rival made a mistake to attack and win the match.

“I admit I was a little worried after learning that my opponent is an International Master (IM),” Quan said.

Quan, 32, is a disabled chess player with the highest Elo in Vietnam.

At the age of three, he contracted paralytic polio, causing paralysis in his legs and weakness in his left arm. He has been passionate about chess since the fourth grade, winning first prize at the Kien Giang South Communal Tournament.

In 2009, he first attended a disabled chess tournament in the Go Vap district of Saigon.

Shashikant, 41, was crowned disabled world champion in 2017 and thus won the IM title. Previously, it had won all three IM standards in 2009, but had never surpassed the 2400 Elo. He developed polio at 18 months, letting one leg grow more slowly than the other.

Despite Quan’s victory, the rest of the Vietnamese squad failed to beat their Indian counterparts in the third group game.

The team had already beaten Kazakhstan and Romania.

After three laps, Vietnam finished 14th with four points. The team will face Colombia in their fourth game, which begins at 9 p.m. Hanoi time on Tuesday.

There are 396 players from 61 teams from 45 countries and territories competing in the first Online Chess Olympiad for People with Disabilities organized by the International Chess Federation (FIDE), which is scheduled to end next Wednesday.

Depending on the tournament format, the time control in all stages is 25 minutes + 10 seconds.

The first phase will feature the Swiss seven-round system to determine the top four teams, using the double round in the semi-finals and the final.

No one knows that I’m a bad chess player