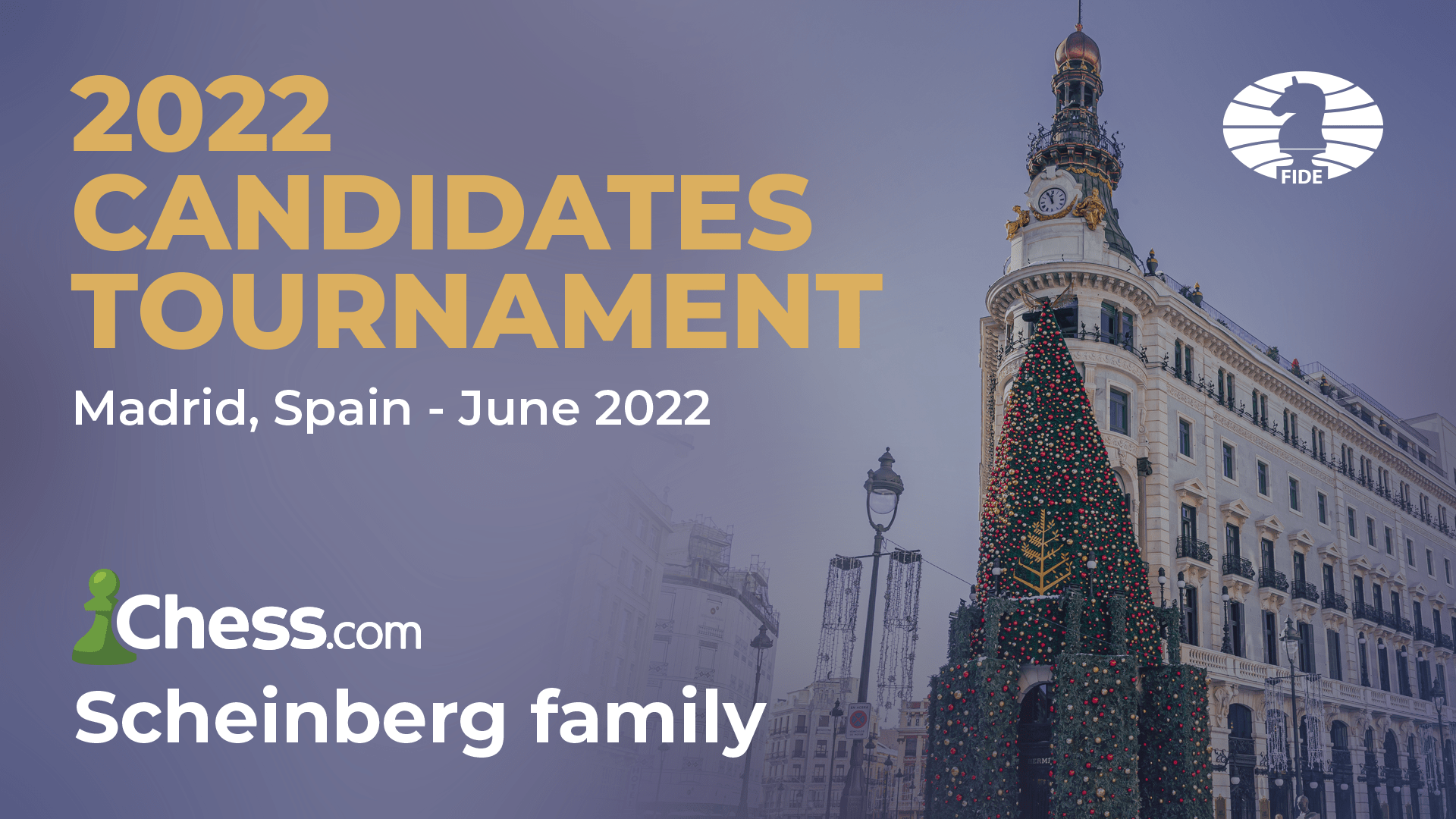 The Candidates Tournament will take place in June 2022 in Madrid, sponsored by Chess.com

Palo Alto, Calif., December 28, 2021 â€” The 2022 Candidates Tournament, which will produce the challenger for the next World Chess Championship match, will take place in June 2022 in Madrid, Spain. As the organizing sponsor of this prestigious tournament, Chess.com signed an agreement on Monday with the governing body FIDE and the Scheinberg family, sponsor of the event.

So far, six players have qualified for the 2022 edition: general managers Fabiano Caruana, Jan-Krzysztof Duda, Alireza Firouzja, Sergey Karjakin, Ian Nepomniachtchi and Teimour Radjabov. The last two players will come from the 2022 FIDE Grand Prix, which will be held from February to April 2022.

Following the agreement between FIDE, the Scheinberg family and Chess.com, the dates and the host city of the next Candidates Tournament have been fixed. The tournament is scheduled to take place from June 16 to July 7, 2022 in Madrid. The location of the game room has not yet been announced, but it is already known that the opening and closing ceremonies will take place at the luxury Four Seasons hotel in the Spanish capital.

â€œThe Candidates Tournament is one of the most exciting events on the chess calendar, and as such it has a huge following. Its popularity has grown to the point that it is comparable to that of the world championship, â€said FIDE President Arkady Dvorkovich. .

“For FIDE, it is a great satisfaction to organize this important tournament in Spain, a country that loves chess. The partnership with Chess.com will also allow us to organize this event at the highest level, as it was the case recently at FIDE Chess.com Grand Swiss in Riga. Last but not least, I would like to thank the Scheinberg family, whose constant contribution to chess deserves real appreciation. “

“For the Spanish Chess Federation, it will be a great honor to cooperate with FIDE and Chess.com to make this event possible,” said the President of the Spanish Chess Federation, Javier Ochoa de EchagÃ¼en. â€œChess has always been very popular in our country and highly respected as an educational tool, with hundreds of thousands of children engaged in chess activities in schools. Organize a leading sporting event like the Candidates attracts media attention and gives all of these kids something to admire. “

â€œI am very happy to be working with FIDE and the Scheinberg family on this event,â€ said Erik Allebest, CEO of Chess.com. “As a fan, I am already looking forward to following this incredible tournament and I am looking forward to the result. I am also happy that these incredible players have the opportunity to play in such a wonderful city and what will surely be a great place. “

The tournament is made possible by the generous sponsorship of the Scheinberg family, who have declared themselves honored to once again contribute to a major chess event that is part of the world championship cycle. Chess.com will provide additional support as a co-host and official broadcast partner, again featuring exclusive images of the game room on Twitch.

The tradition of chess in Spain goes back several centuries. The rules of chess as we know them today were established in Spain at the end of the 15th century, when the Catholic priest Ruy Lopez de Segura (circa 1530 – circa 1580) was considered the most important player. strong of the world. All major chess events have taken place in Spain at least once, including among others the 1987 Kasparov-Karpov World Championship in Seville, the Susan Polgar-Xie Jun Women’s World Championship match in Jaen in 1996 and the ‘Chess Olympiad in Calvia in 2004.

Spain have also hosted the candidates’ final twice previously. In 1987 GM Anatoly Karpov qualified for his Sevilla match by beating GM Andrei Sokolov at Linares, and the 1993 FIDE Candidates Final between GM Nigel Short and GM Jan Timman was held in El Escorial, around 45 kilometers (28 miles) northwest of Madrid. The Magistral Comunidad de Madrid 1998, won by GM Viswanathan Anand, was the last major chess tournament in the Spanish capital.

The Candidates Tournament itself also has a long tradition. It was first held in 1950 in Budapest and the second edition, the 1953 Candidates’ Tournament in Zurich, is one of the most famous tournaments in chess history.

In modern times, the 2013 London Candidates Tournament has been particularly dramatic and historic, when current GM World Champion Magnus Carlsen managed to qualify for his first World Championship. He beat Anand later that year and successfully defended his title in 2014, 2016, 2018 and 2021.

Recently, Carlsen said he wants to defend his title only if his opponent is from the new generation of chess players. His favorite opponent is 18-year-old Firouzja, who recently reached second in the world behind Carlsen as the youngest player to cross the 2800 Elo margin.

Founded in 1924, the International Chess Federation (FIDE) is the governing body of the sport of chess and regulates all international chess competitions. Established as a non-governmental institution, it was recognized by the International Olympic Committee as a world sports organization in 1999. Based in Lausanne, it is one of the largest sports organizations, comprising 195 countries as a affiliated members, in the form of National Chess Federations.

Chess.com is the world’s largest chess site, with a community of over 77 million members around the world playing millions of games every day. Launched in 2007, Chess.com is the leader in chess news, lessons, events and shows. Visit Chess.com to play, learn and connect with chess, the world’s most popular game.