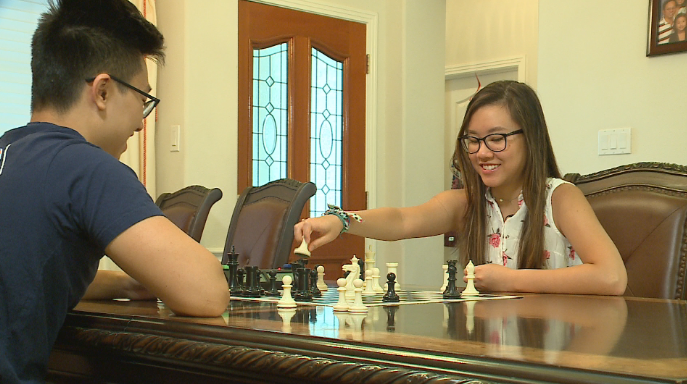 AUSTIN (KXAN) — A competitive chess player from Austin is competing in a national tournament this week with the goal of winning another championship.

Emily Nguyen, 16, has been playing competitively since she was 6, learning the game from her brother and then developing her skills, playing against some of the best young players in the world.

As other hobbies and schoolwork have taken a bigger place in her life, her time on the road has diminished, but she still manages three or four big tournaments every year.

Her first major international victory came in 2011 at the North American Youth Championship, where she won the trophy in the girls under-10 division. Since then, she hasn’t stopped winning.

For the past two years, she has won first prize at the Texas School Chess Championships for high school players in the state.

“I learn a bit every tournament, like how I have to mentally prepare myself,” Nguyen told KXAN.

This week, she’s in St. Louis for the U.S. Junior Championships, an invitational tournament featuring 10 of the nation’s best players under the age of 20. She hopes to pick up another victory when the competition ends on July 20.

Players will split over $10,000 in prize money, with the winner taking home $3,000. The top player will also receive $10,000 in scholarships to use at any institution.

Nguyen won the tournament the first time she played there in 2016 and has placed third each of the past two years.

“I don’t really think about price,” she said. “I just try to play the best I can.”

That mindset will stand her in good stead as the rising senior prepares to take a break from her chess training to begin applying to colleges this fall. Several public schools offer chess scholarships, including the University of Texas at Dallas, UT Rio Grande Valley and Texas Tech University, but Nguyen says she doesn’t want to pursue a career in the game.

“Chess will always be important to me, and I’ll try to keep that in my life forever,” she said, “but I feel like I don’t really want to go pro.”

For now, she will continue playing (and beating) her brother, taking on the best players in the world when she has the time.