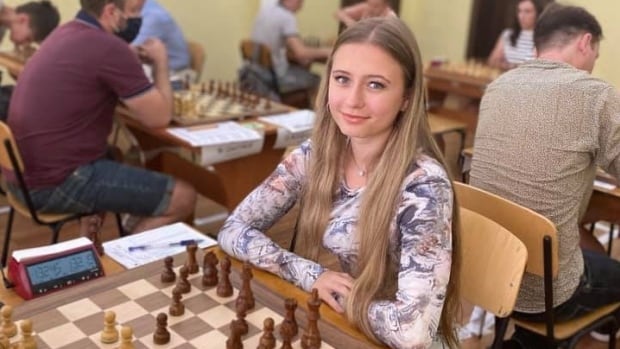 As Vladimir Putin’s invasion of Ukraine rages on, Svitlana Demchenko pauses to consider how she will handle her next Russian opponent.

“I think it depends on the person…not all Russian players have such strong opinions,” said the 18-year-old Ottawa chess player, who holds the Women’s International Master title and is one of Canada’s highest ranked competitors.

“I don’t know how I would feel. I’m a little conflicted.”

Born in the southern Ukrainian city of Mykolaiv, Demchenko has friends and relatives there who sleep at night in bomb shelters. Between these worries and his university studies, chess is not his highest priority at the moment.

Nevertheless, the war, now more than a month old, reverberates far beyond Ukraine’s borders – and the world of chess is no exception.

Tournaments have been moved. A top Russian player has been suspended for supporting Putin, while others can’t play due to travel restrictions. There have been calls for the head of Russia’s FIDE governing body to resign, even though he has spoken out against the dispute.

Russia’s ties to chess run long and deep, with players such as Garry Kasparov, Boris Spassky, Anatoly Karpov and Mikhail Botvinnik dominating the game’s landscape for the better part of a century.

The country has twice as many grandmasters as any other, according to a 2021 article on chess.com, the most popular online chess site. Tens of thousands of people play the game recreationally.

So when Putin’s forces invaded Ukraine in March, it sent shockwaves through the highest levels of the game, according to Victor Plotkin, the FIDE representative of the Canadian Chess Federation (CFC).

The invasion prompted the CFC to condemn Russia’s “evil and illegal” actions and applaud the courage of the Ukrainian people. The federation also said that, for now, no Canadians will participate in official events on Russian soil.

While dozens of top Russian players have denounced Putin’s actions, some have remained loyal, including Sergey Karjakin, one of the best in the world.

Prior to the war, Karjakin had qualified for the 2022 Candidates Tournament, an eight-person round robin to determine who will face Norwegian chess superstar Magnus Carlsen for the world championship title in early 2023.

But after his comments, FIDE suspended Karjakin for six months, which almost certainly means he will not be able to compete.

“I think it’s fair, but it’s a very strong decision by FIDE,” Plotkin said. “It means that at the very top, Russia has a problem.”

The suspension of Karjakin, who was one win away from becoming world champion in 2016, isn’t the only big development.

Several players have called for the resignation of FIDE chief Arkady Dvorkovich. That’s because of Dvorkovich’s close ties to the Kremlin – he previously served as Russia’s deputy prime minister.

Despite that fact, many believe, political ties aside, he did a good job in that role.

The 2022 Chess Olympiad, which attracts teams of players from countries around the world, has been moved from Moscow to Chennai, India. International sanctions, meanwhile, are reducing funding for the sport because many Russian companies were sponsoring high-profile tournaments, CFC chairman Vlad Drkulec said.

Plotkin and Drkulec say that at the moment the effects of the war are felt mostly at the highest levels, those which Canadian grandmasters tend not to reach. (In the April 2022 FIDE rankings, Canada had no players in the top 100.)

I’m just in disbelief that this can even happen.— Svitlana Demchenko

Nor is the chessboard turning into a place for political disagreements, Drkulec said, at least not among Canadian players of Russian and Ukrainian descent.

“In Canada, I don’t know anyone who supports what [Putin’s] Do the. And it just seems crazy, really. He just seems like he wants to smash everything,” he said.

“He’s just like a petulant kid, getting revenge right now.”

Amidst all this uncertainty, the growing world of online chess has stepped up to help the people of Ukraine.

Shortly after the invasion, American grandmaster Hikaru Nakamura – one of the most prominent online gamers, with more than 1.4 million subscribers on online gaming platform Twitch – released content tied to failures for 12 straight hours at a fundraiser that raised over $100,000 for humanitarian relief efforts.

“I think as a streamer there should be a social implication that…you should do something to help out,” said University of Toronto student Qiyu Zhou, who holds the title of female grandmaster and streams chess and other electronic sports to thousands of followers. on his own Twitch channel.

Zhou participated in Nakamura’s fundraiser and also organized his own. Aside from “a troll or two,” her feeds have been largely free of any political back-and-forth, she said.

“Chess players are much more in phase [with the war] than a lot of other streamers, just because we have friends in Ukraine, friends in Russia,” Zhou said.

“I don’t blame anyone for this, but I feel like overall the chess players have done a very good job with fundraising.”

As for Demchenko, she said that while some online games may be “more passionate” than before, she has seen overwhelming support for Ukrainian chess players – and the overwhelming feeling is that almost everyone wants to help. .

“The situation is just very scary and worrying,” Demchenko said. “I’m just in disbelief this can even happen.”