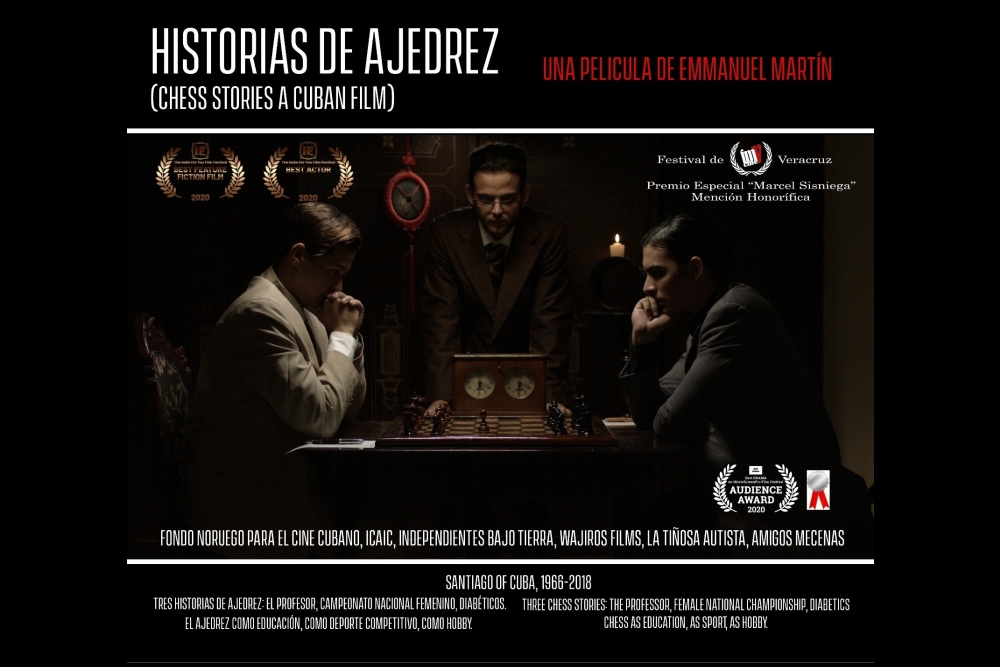 In his film “Historias de Ajedrez”, Cuban filmmaker Emmanuel Martin Hernandez presents three stories exploring life in Cuba. In fact, there are actually four stories. Chess is the unifying element across the different episodes, all of which in one way or another relate to the city of Santiago de Cuba.

The protagonist of the first story is Raul, a chess teacher who loves the game above all else.

He is literally addicted to games, not just chess. However, he struggles to cope with the rest of his life. The film shows him playing flash chess with his friends. This is where he feels at home. 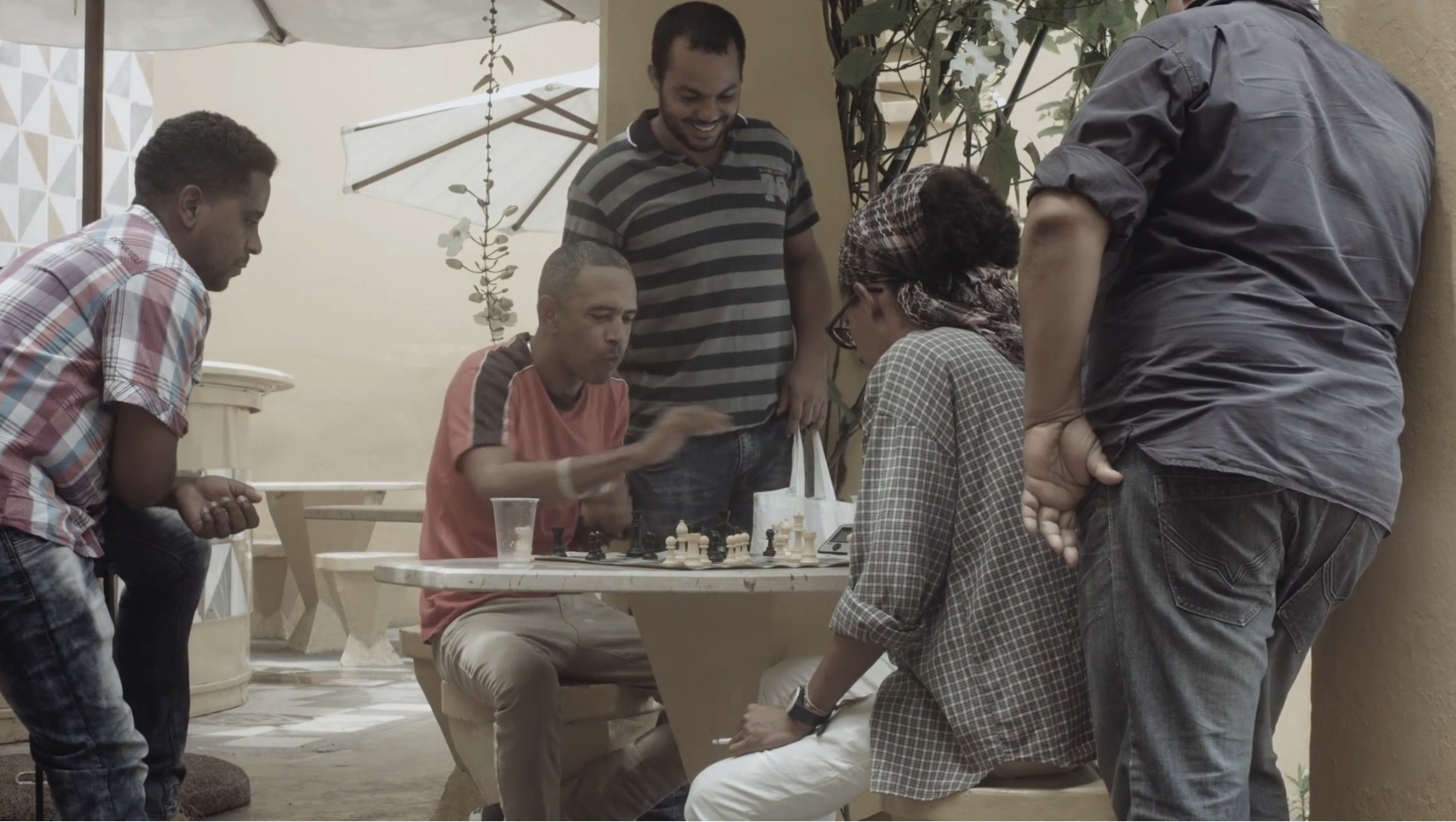 During a phone call, he tries to appease his creditors. That’s when you learn about gambling debts. Her marriage is in shambles. His wife lives with another man. Raul rarely sees their son. Eventually, he even loses his job as a chess coach and has to sleep on the streets. The story ends with Raul beaten because of his gambling debts.

The second story features a female protagonist. Osdalgia Vidaux is a devout Christian, a strong player and a grandmaster competing for the title of national champion. 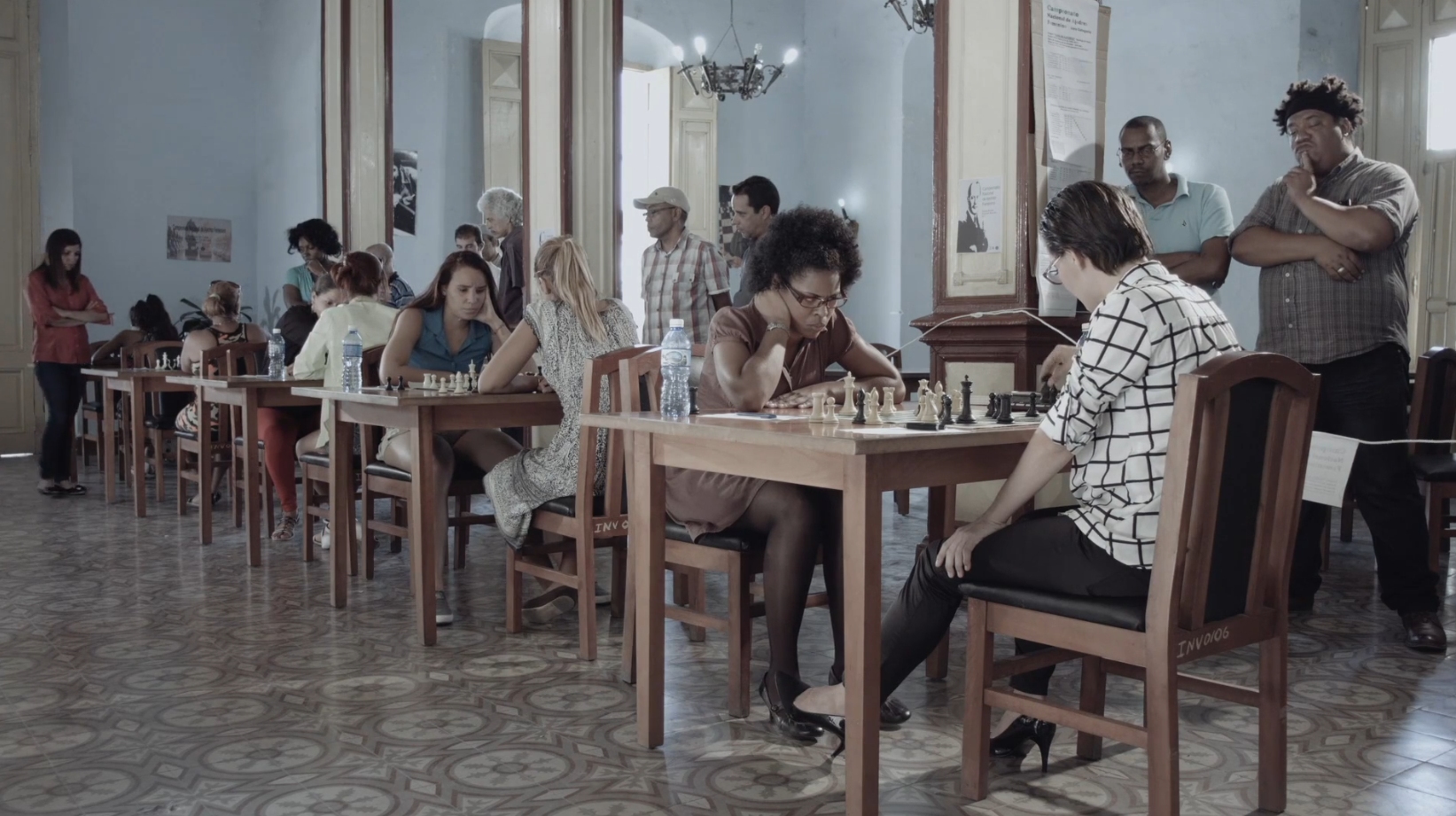 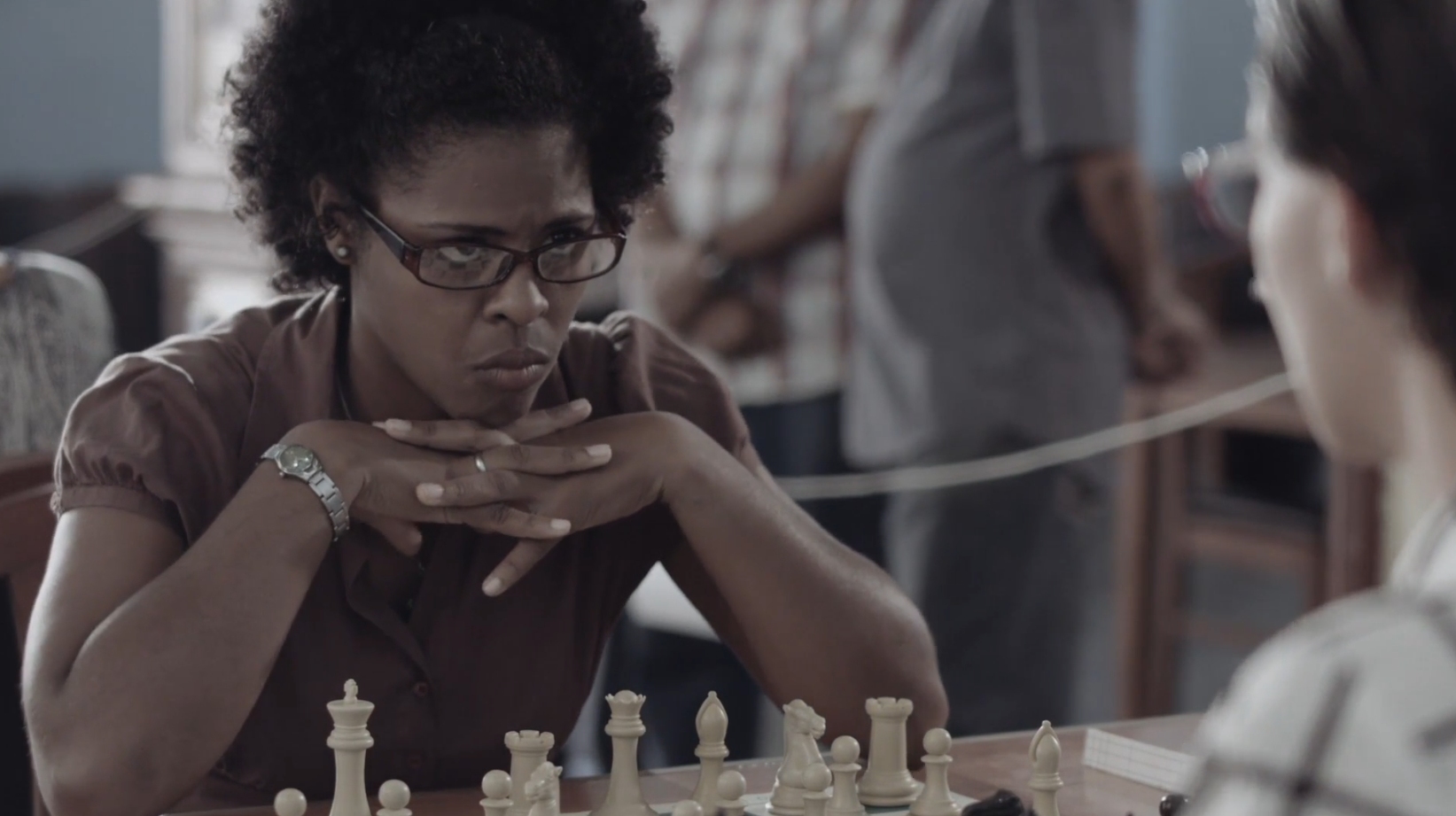 Winning the title would qualify him for the Chess Olympiad. However, she is also a housewife and mother of young children. The pregnancies had a negative impact on her career. In addition, she also has to take care of her sick mother. Winning the championship would also benefit Osdalgia and his family economically.

Between games, Osdalgia uses her notebook and ChessBase to prepare for the opponents she is about to face. 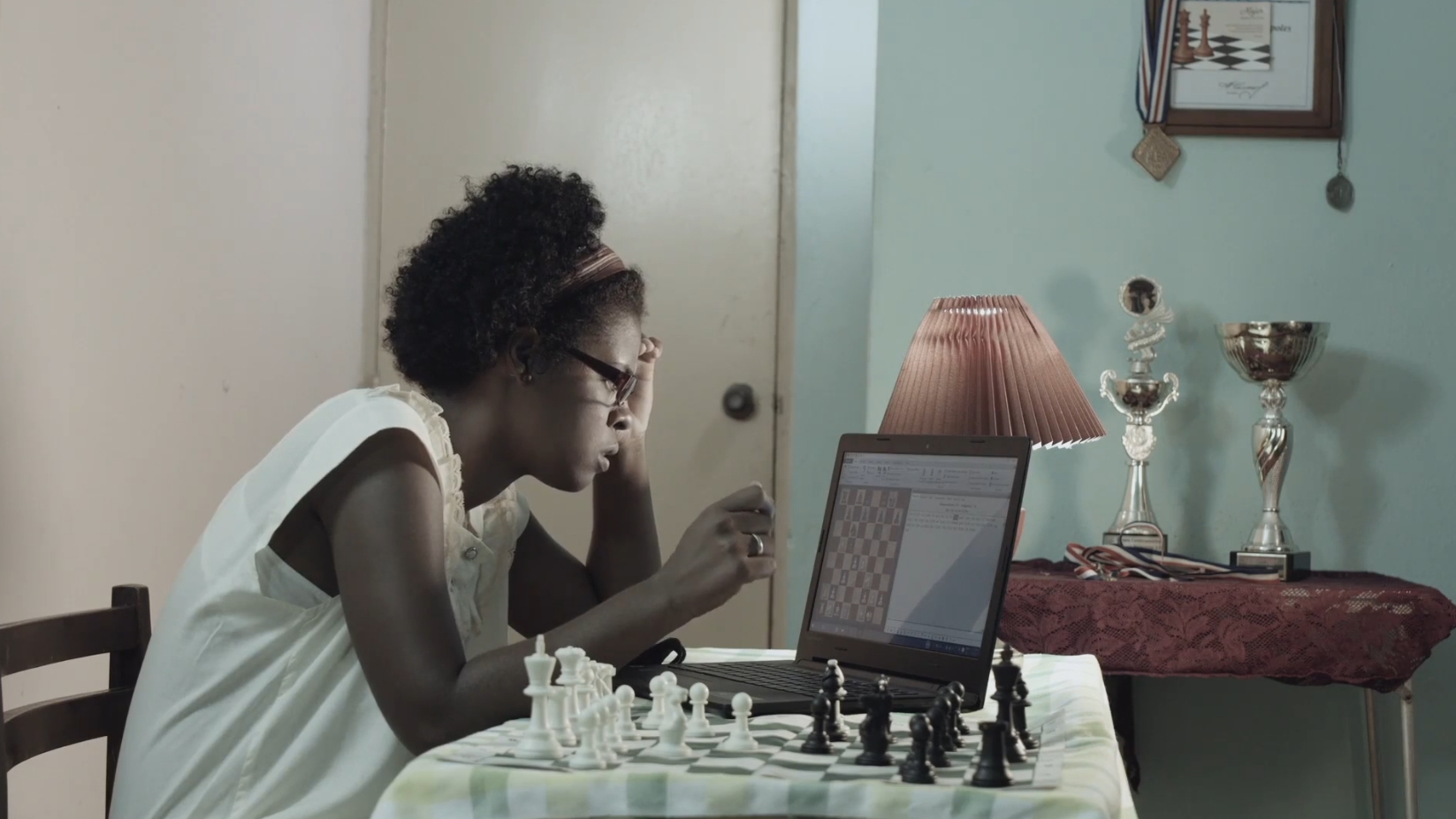 However, the many sources of stress in her life negatively impact Osdalgia’s performance. Her trainer suggests using the Houdini engine to cheat, which she refuses. While participating in the tournament, Osdalgia’s husband kills his sick mother, played by famous Cuban actress Adela Legra, famous for her role as the protagonist of the Latin American classic “Lucia”. Osdalgia’s husband is played by Jorge Molina (“Juan of the Dead”, 2011).

At her mother’s funeral, Osdalgia states that she came to the conclusion that a good Christian can never be a successful athlete and that it is impossible for a woman to take on both family life and competitive sports.

The third story begins in 1966. Havana hosts the Chess Olympiad. The sporting event is of great importance for the still young Communist Republic. The matches are broadcast on television. 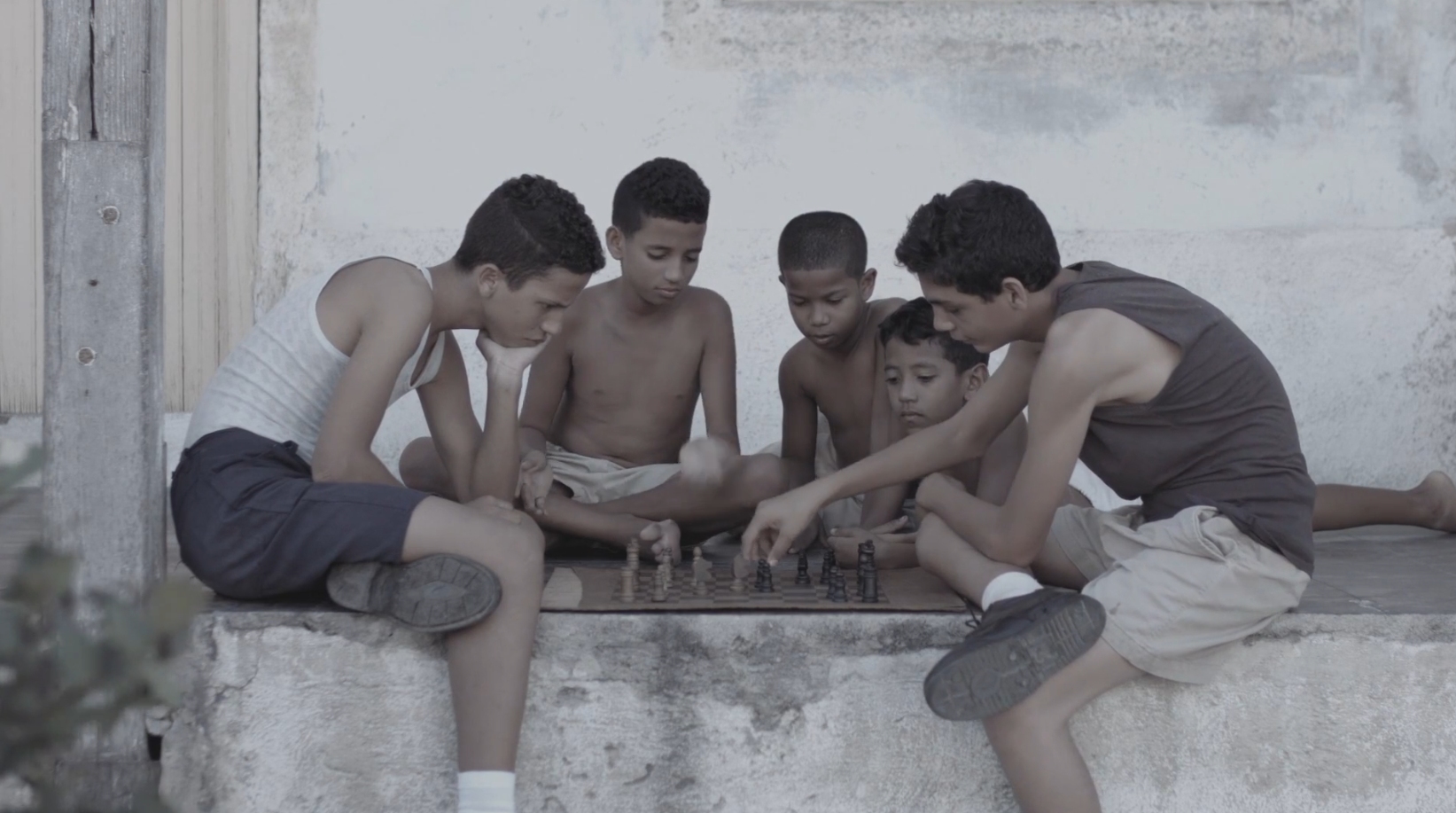 The whole country is obsessed with chess, including Pedro and Pablo, both eleven years old, who gather around a homemade chess board with other street kids, debating the best moves and trying to learn by learning. themselves to play with chess books.

Their love for chess unites Pedro and Pablo throughout their lives. 52 years later, they are both sick. Pedro has difficulty walking, Pablo suffers from diabetes. They still meet regularly to play chess, dressed in T-shirts bearing the effigy of Capablanca or the badge of the Capablanca Memorial. 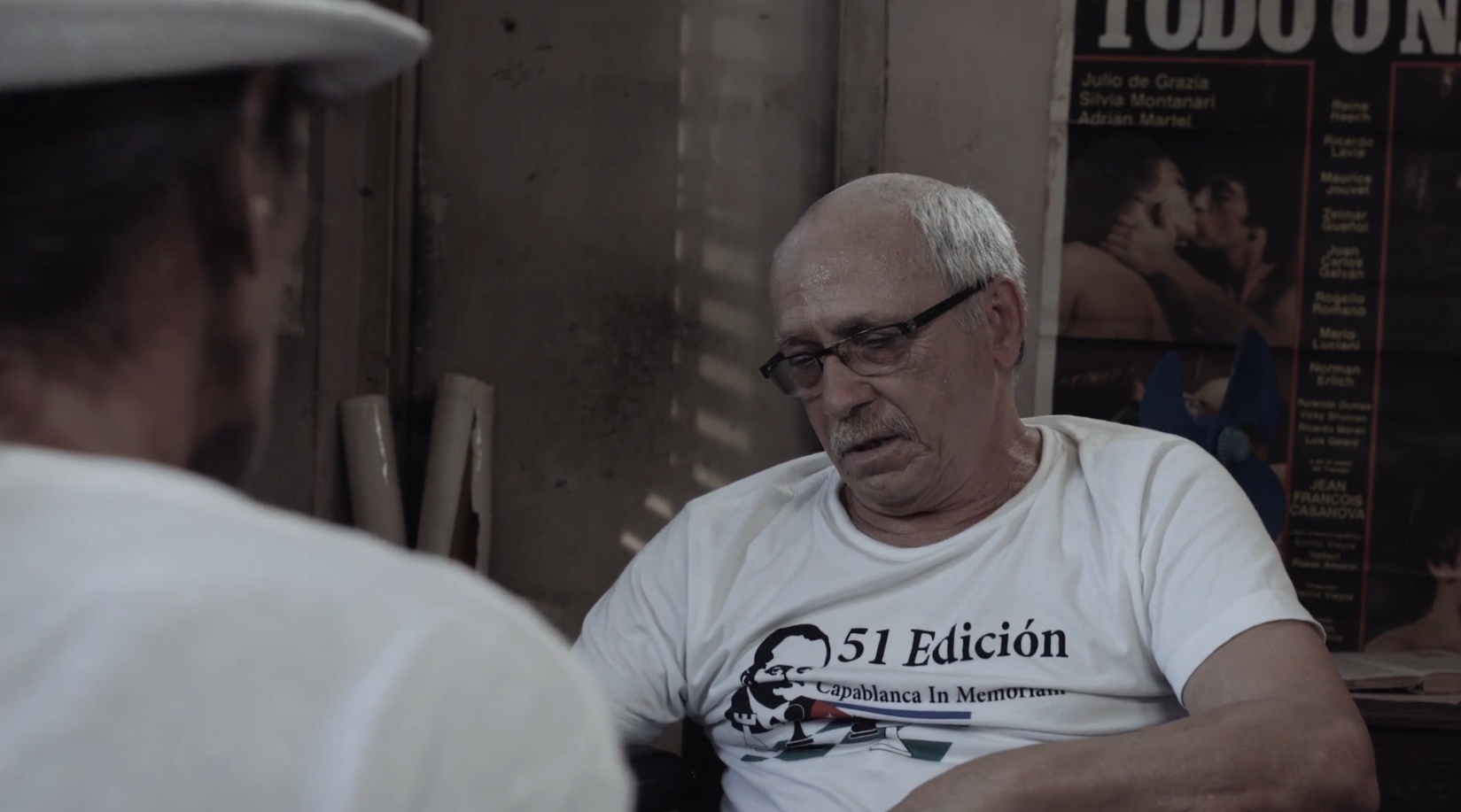 Pablo’s daughter came from Havana to Santiago to sell her father’s house and take him with her to Havana. When Pablo learns that he is about to lose his chess partner, he offers his daughter money in order to allow his friend to stay in Santiago.

A Voice Off Screen tells a fourth additional story, allegedly an urban internet legend. Unbeknownst to the World Chess Federation and the Russian authorities, Bobby Fischer and Anatoly Karpov reportedly contacted each other by mail in 1975 to organize a game as a private event with a single witness. 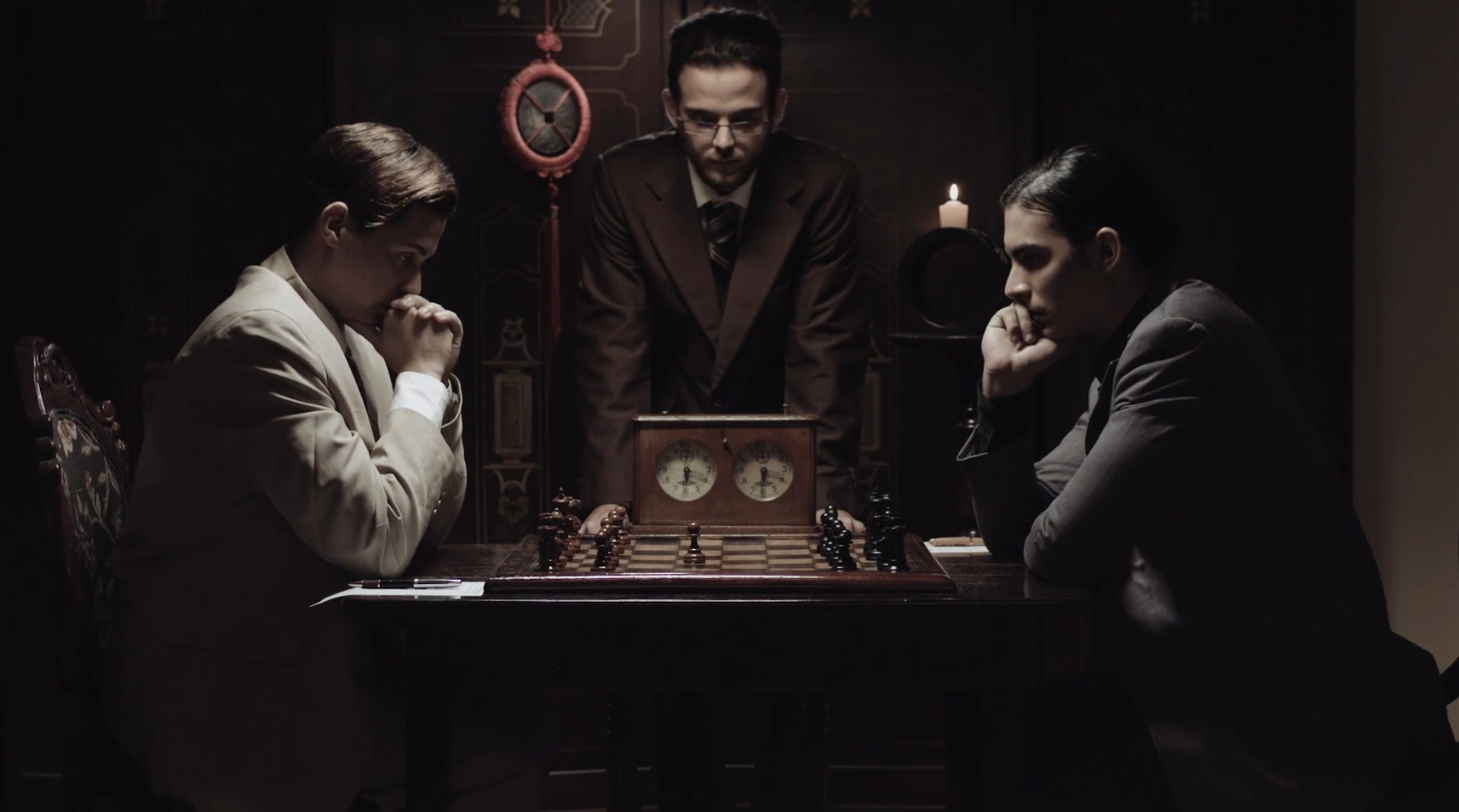 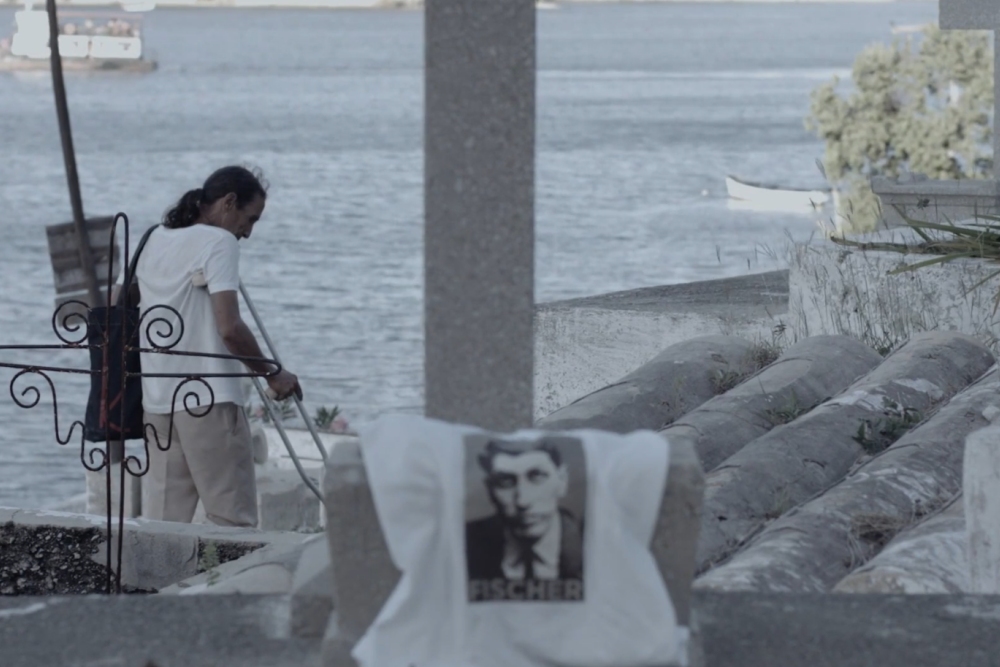 The writer, director and producer of the film Emmanuel Martin is an expert in chess. A conversation in the film between Grandmaster Osdalgia Vidaux and a chess enthusiast during the Cuban Women’s National Championship mentions a particular episode during the 2008 Chess Olympiad in Dresden, Germany, where the fictional character Osdalgia Vidaux won a major game, which earned him an individual title. silver medal.

In 2008, the real Cuban Grand Master Oleiny Linares Neapel, still WIM at the time, indeed won a silver medal at the Chess Olympics in Dresden: with eight wins and two draws in ten games, she achieved the second best individual performance in table four. . Oleiny Linares Neapel was born in Santiago de Cuba in 1983 and is still a very active and successful player. Could she be the inspiration for the character in the film?

The character of Raul in the first story is a tragic hero, a typical loser, found in large numbers all over the world. Director Emmanuel Martin is a chess player himself, with good connections to the Santiago de Cuba chess community, and no doubt knows players like Raul personally. Their love for the game kept them from growing up. The passion for chess can be a source of joy and friendship for players, but it can also hinder their careers or distort their view of reality. They are artists.

Grandmaster Osdalgia Vidaux, on the other hand, has everything Raul lacks. However, she also cannot find happiness. She’s a successful player with an intact family, but as a woman there’s no way she can handle both things at the same time. The fact that she doesn’t know how her mother died gives her character a particularly tragic note.

The third story is more upbeat in tone. Moving rapidly from 1966 to 2018, he tells of a great and long friendship defined by a mutual interest in chess. And even the bonus story about an alleged secret match between Fischer and Karpov contains elements of reconciliation. Against all limitations and obstacles, in the midst of the Cold War, the best American player and the best Russian player meet to play a game of chess.

And there is another exceptional touch that Emmanuel Martin added to his work. Women feature prominently in all three stories, and the director has managed to include a number of sultry scenes, which don’t feel out of place or gratuitous – a rather rare occurrence in films revolving around chess. 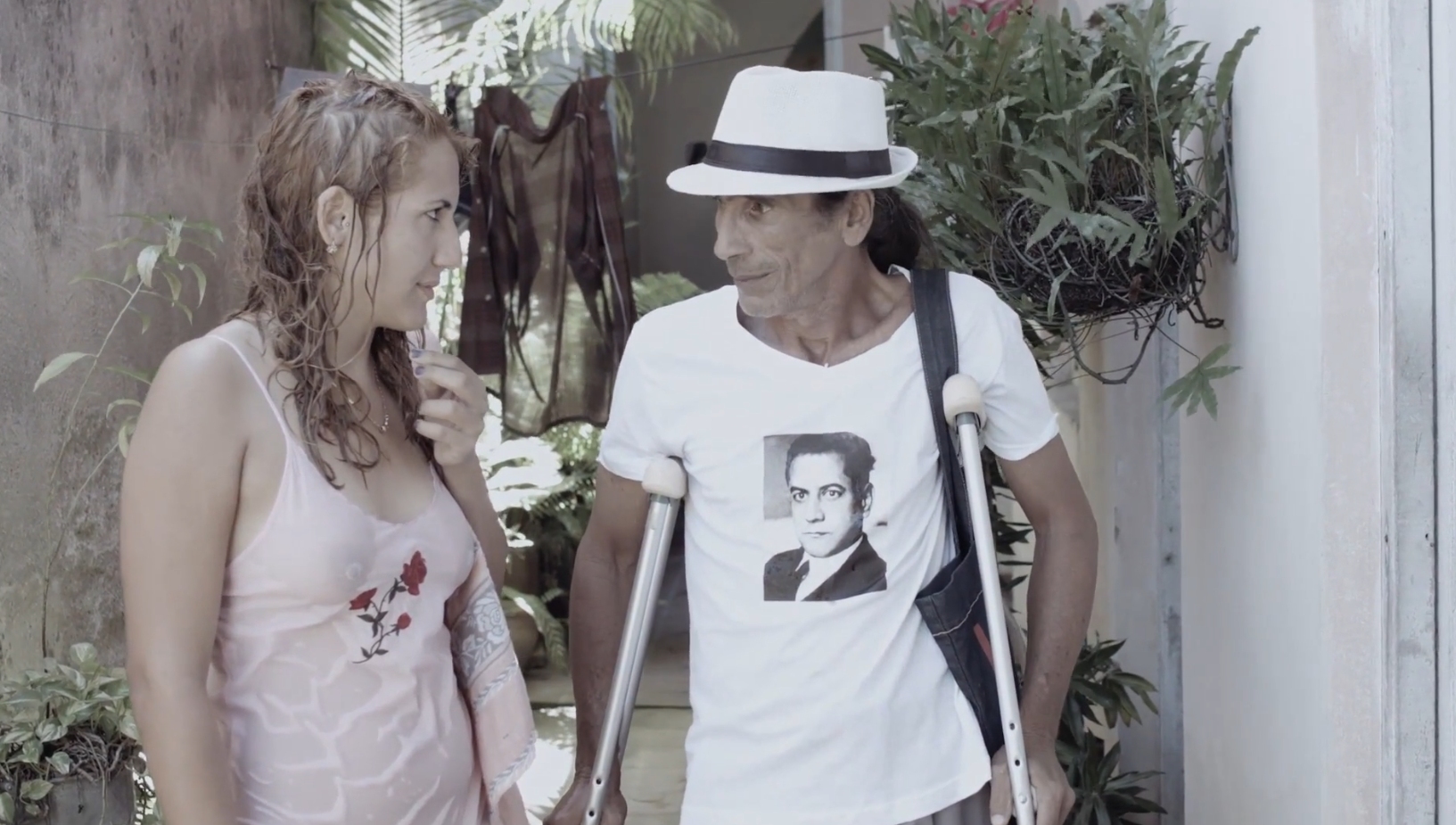 Emmanuel Martin’s â€œHistorias de Ajedrezâ€ was filmed in 2019. Unfortunately, due to the COVID-19 pandemic, the film and those involved in its creation did not receive the attention their work deserved. The film has been screened at numerous festivals, such as the Callela Film Festival 2020 in Spain, and has won seven awards to date.

In 2022, it could become available on demand on the Vimeo streaming platform. 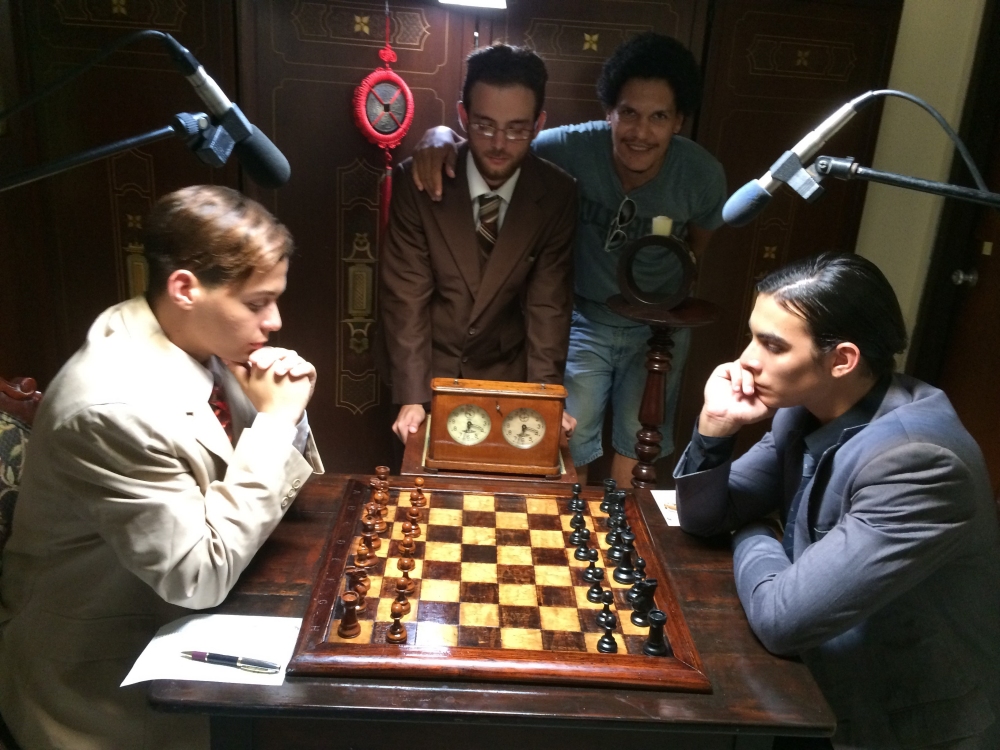 The director and his actors

Emmanuel Martin Hernandez learned to play chess as a child and participated in several Cuban youth championships. He then worked as a chess teacher at irregular intervals when he was 24-25 and 31-35, for a total of eight years.

He has published a number of articles on the Grand Masters and International Masters of Santiago de Cuba.

For a while, Emmanuel Martin worked as a free journalist. He personally knows and is friends with many chess players, amateur players and club players from his hometown of Santiago de Cuba.

In Spanish (with English subtitles)

Another chess match on Monday night