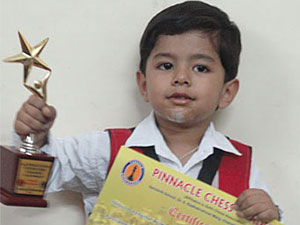 Sparsh Bisht was born in May 2009 in the Indian city of Gurgaon, near Delhi. He learned chess last November and has already participated in national level tournaments. And celebrated its fourth birthday last month! Vineet Gill met Sparsh and described his impressions in one of India’s most prestigious newspapers.

When you first meet Sparsh Bisht, he comes across as another high-spirited four-year-old, driven by impatience and the need for activity. There’s something cute and endearing about the way he rushes into the bedroom to retrieve the chessboard after asking whether or not he should take the clocks. Similarly, when he lays the pieces down, you marvel at the child’s ability to remember the bishop going next to the knight, and give him a condescending and indulgent smile as he insists that he will play with the whites.

Sitting on the other side of the chessboard, however, his demeanor changes, as does yours. He behaves at least five times his age, the aggressive adult pounding his pieces on the board and following him with a dark look. And his movements – thought out at least a step ahead – soon start to make you feel like an embarrassed child, while Sparsh irritably points out your “touch and move” fault.

Born in May 2009, Sparsh (pictured above by Free Press Journal) is Gurgaon’s youngest chess player, having already played in two national level tournaments and one state and district championship each. “He started playing last year in November, when he was three years and ten months old,” said Sparsh’s mother, Preeti Bisht.

Chess talent, like mathematical or musical ability, appears early in life and, once identified, must be carefully cultivated. In Sparsh’s case, it was his father Rajendra Bisht, an engineer in Gurgaon, who became his primary inspiration as his first chess buddy. “I had a knee injury and spent a lot of time playing chess on the laptop. And I could see that the game was of great interest to Sparsh,” Bisht said.

The child took exactly one week to learn the basics – which piece goes where and how can it move across the board. And in March 2013, he was preparing for his first tournament, held at a school in Delhi. “They told me there that they had to find him a chess coach,” the father said.

The state-level tournament Sparsh participated in in Gurgaon went remarkably well for him – he took second place in the Under-7 Championship, winning five out of six matches. Now he has just returned from playing in the national championships in Chennai, where he was the youngest player to break into the top twenty, but not the youngest to take part. “There was another child 24 days younger than Sparsh. But Sparsh did much better,” Bisht said.

After school – he goes to kindergarten – Sparsh is already used to solving Sergey Ivashchenko’s chess puzzles Handbook of chess combinations. Then he plays along with the adults in his society, often beating them. And the weekends are reserved for good training with a chess coach. “I would love for him to become the youngest ranked player in the world. The current record is held by a kid from Bombay who was four years and nine months old. Sparsh still has about eight months ahead of him,” Bisht said.

On chess: Checkmate at Christmas in the United Arab Emirates