Inside the ancient medieval walls that surround the bustling Italian town of Marostica, the sun begins to set on a stage that takes place in September once every two years.

This month’s event is extra special as the Covid-19 pandemic means it’s been four long years since these proud citizens have been able to stage their legendary La Partita di Scacchi.

A chess game like no other, La Partita is played by real people, who play all 32 pieces.

The game is the centerpiece of a production that lasts almost three hours and involves a cast of 600 locals who forget their normal lives for a few days to become jugglers, jesters and fire-eaters, trumpeters and drummers, a harlequin and a court jester, troops of archers, horsemen and soldiers armed with pikes, dancers and throwers of flamboyant twirling flags, nobility, peasants and priests.

Although only 14,000 people live here today, this once important outpost of the serene Republic of Venice is marked by three imposing castles.

Overlooking everything atop a high ridge is the ruined Castello Superiore, while in the town centre, facing Piazza degli Scacchi, is the elegant Palazzo del Doglione, with its slender red clock tower distinctive, and a huge 14th century fortress, the Lower Castle.

The middle piazza is unlike any other in Italy as the pitch is laid out like a distinctive chessboard, surrounded during the three days of the Partita by stands, for 3,500 spectators each evening.

As night falls, the time goes back to 1454 and a legendary duel between two nobles for the hand of Lionora, daughter of the lord of Marostica. But this was no ordinary duel: instead of sword fights or jousting, the lord insisted that the suitors play a noble game of chess.

At each reconstitution, a huge spectacle takes place until the chessboard is filled with human pieces. Both players then take their places on a raised platform and perform their moves. 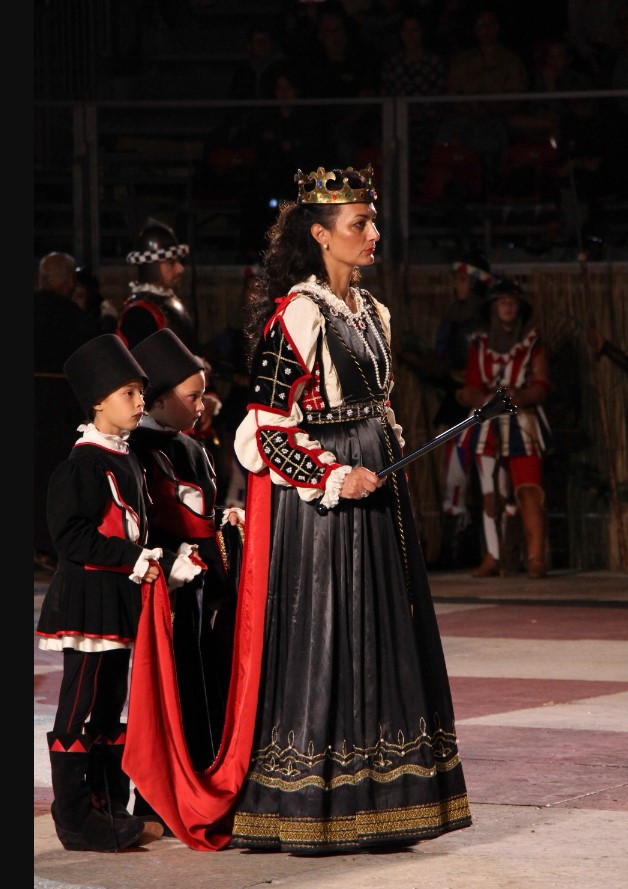 “Apart from a few actors for the speaking roles, the entire vast cast are volunteers, but I wouldn’t call them amateurs because they’re so committed, so passionate,” says full-time art director Maurizio Panici, who oversees more than 12 months of rehearsals and a budget of €500,000 (S$704,000).

“I’ve worked with professional actors all my career, but it’s interacting with a whole community, all year round. A unique and much more satisfying experience.” 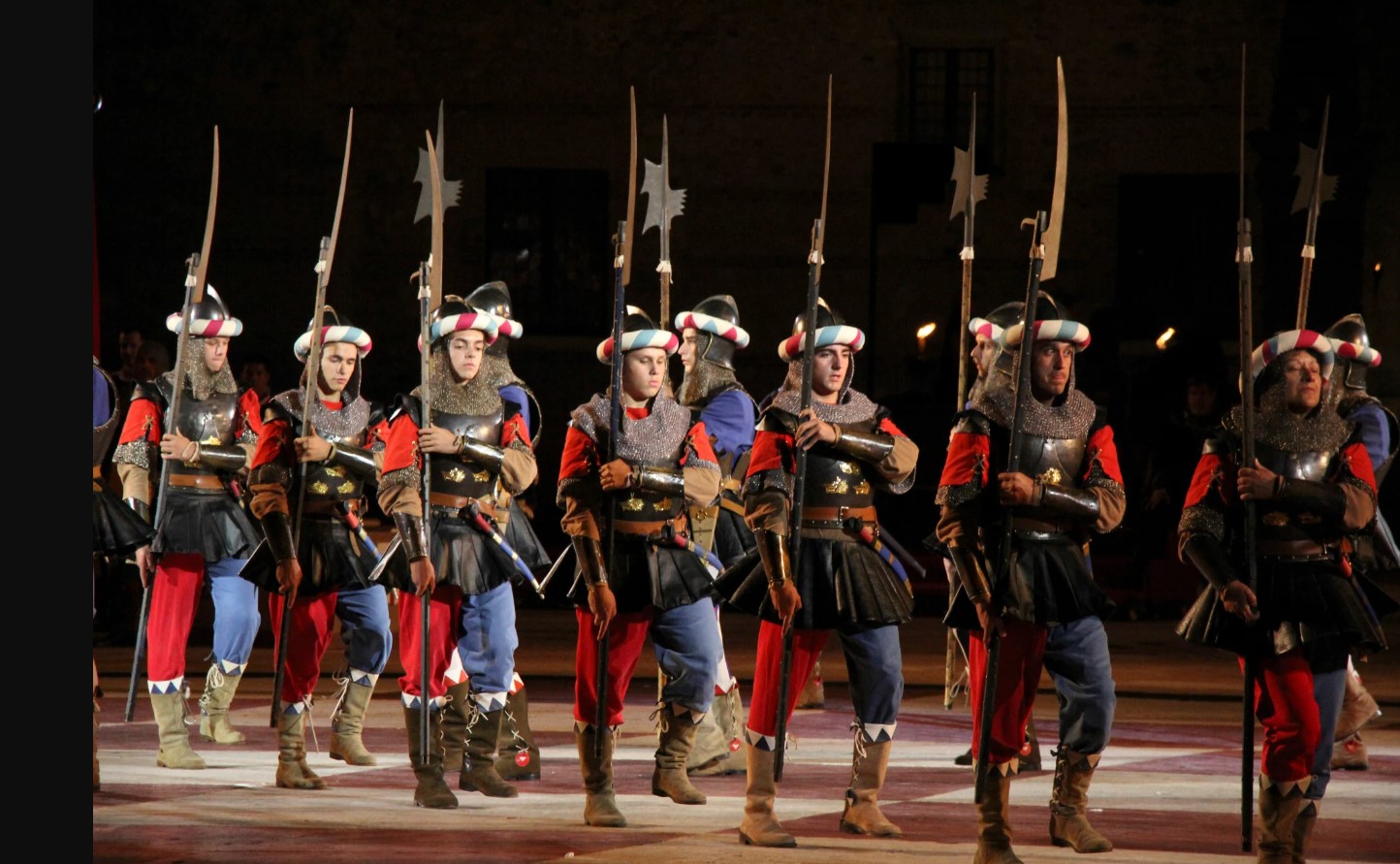 The town’s special relationship with the game of chess can be discerned in conversations with some of the attendees as they walk around, in costume, after the show has ended.

“I started in the Partita when I was only seven years old as a page boy wearing the white queen’s robe, then as a teenager I was an archer, followed by a noble lord, finally becoming a monk!” says architect Simone Bucco, president of the organizing committee.

“The chess match is something we grow up with here, and we all want to take part in it to give something back to our wonderful city.” 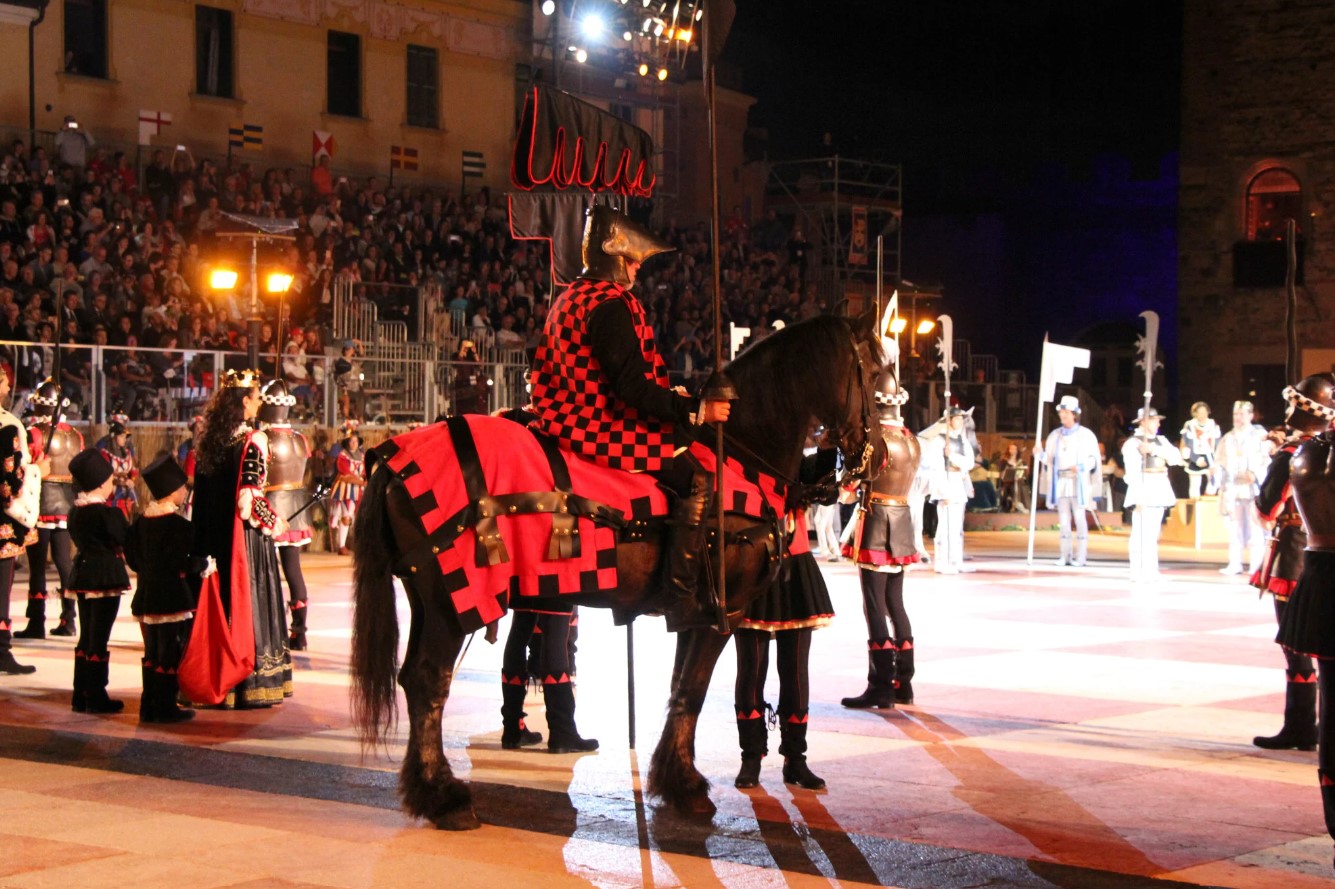 Wladimiro Guerra, who is part of the family that runs the local restaurant Osteria Madonetta, explains with sadness that he no longer participates because work in the restaurant now takes precedence.

“But I certainly enjoyed doing four or five editions when I was younger,” he says. “I was a commander of the archers, a group of school children, and it was great fun teaching them how to be medieval soldiers.

“If you’re from here, well, the Partita is in your heart.” 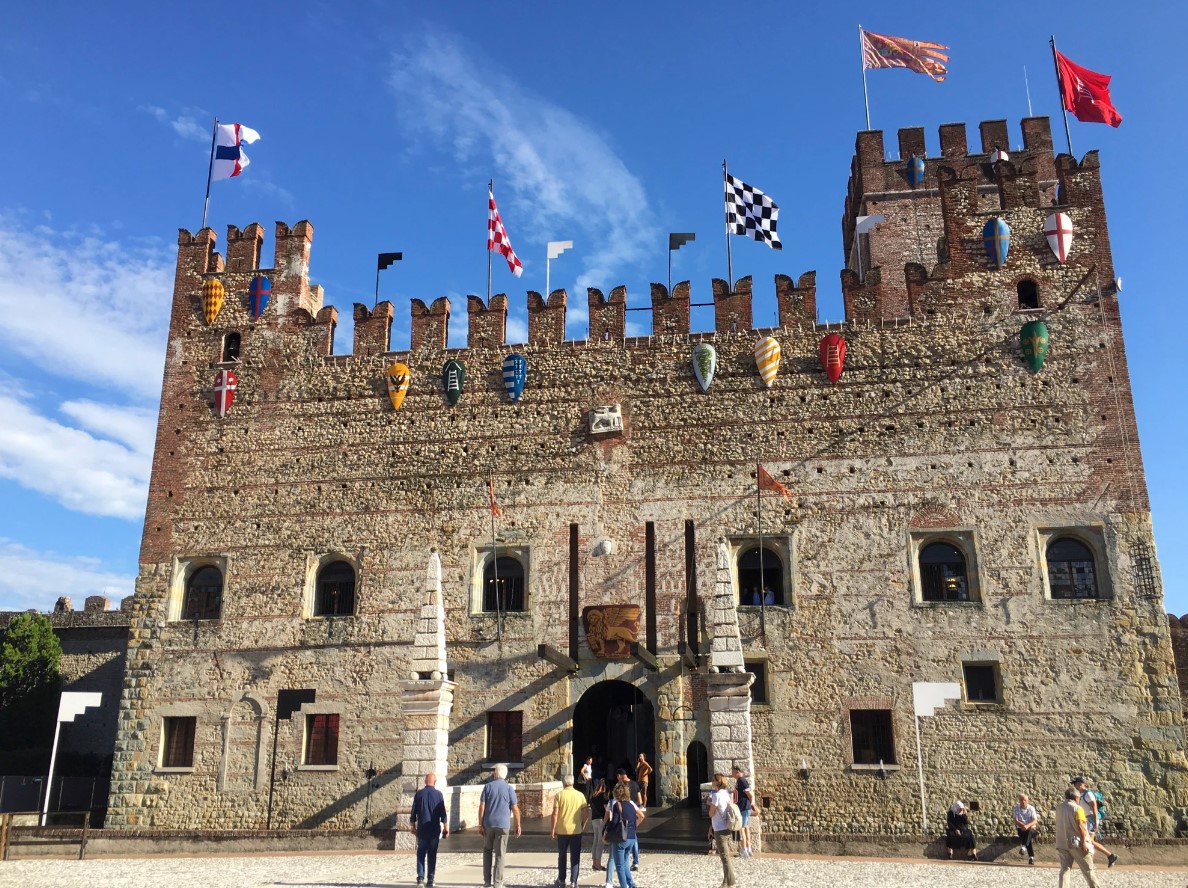 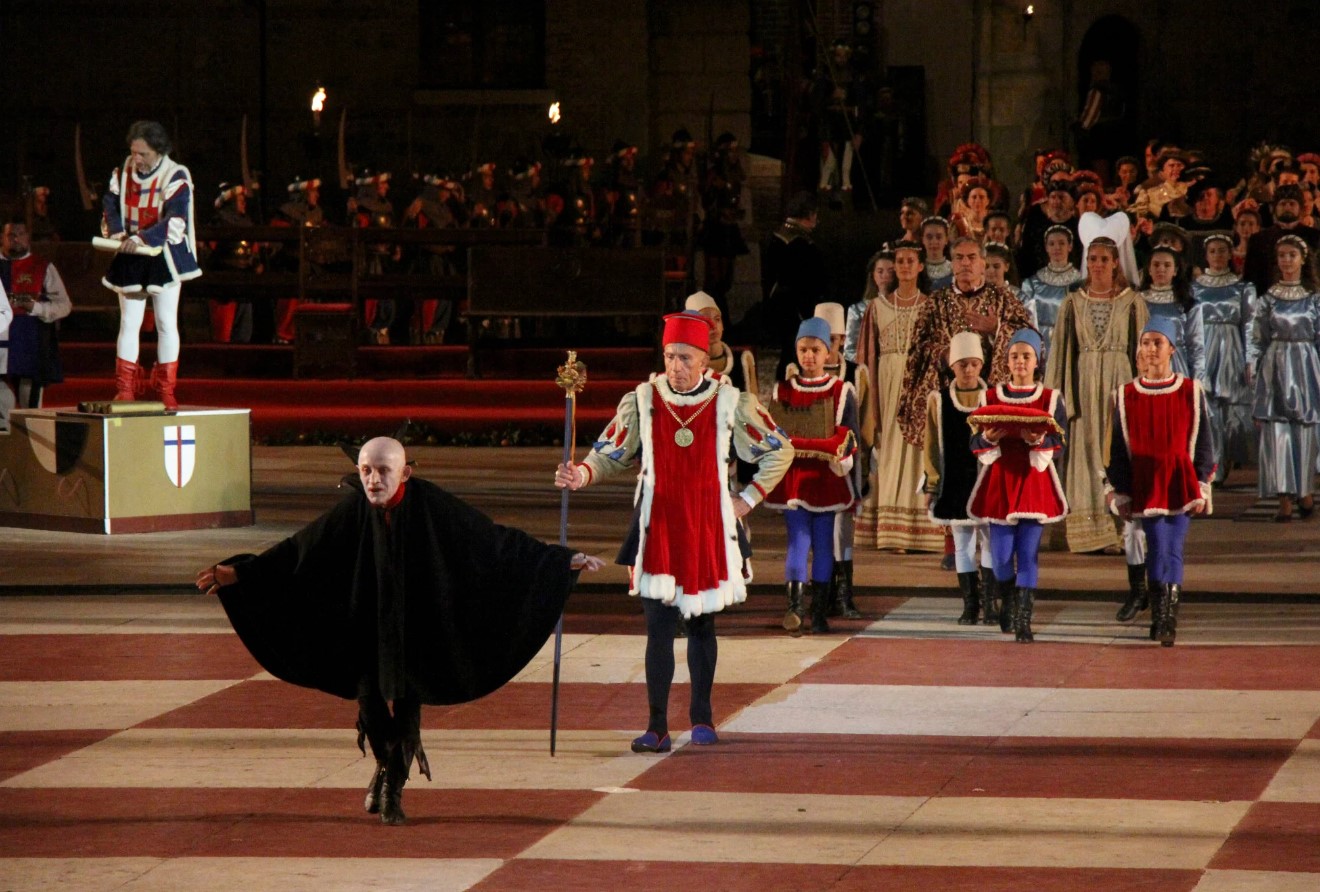 Once a professional actor, Vincenzo Moretti, who plays Il Giullare di Corte, a delightfully malevolent court jester who resembles the Joker from a Batman movie, ended up staying in Marostica when he retired, volunteering while earning a living as a dog-sitter.

Although chess grandmaster Anatoly Karpov has been there before, Marostica’s game is more like the rapid chess played by Beth Harmon in the TV miniseries The Queen’s Gambit.

The game lasts about 30 minutes; the outcome is decided in advance as careful choreography is required when moving real horses as knights and wooden castles on wheels that look like the Daleks from Doctor Who. 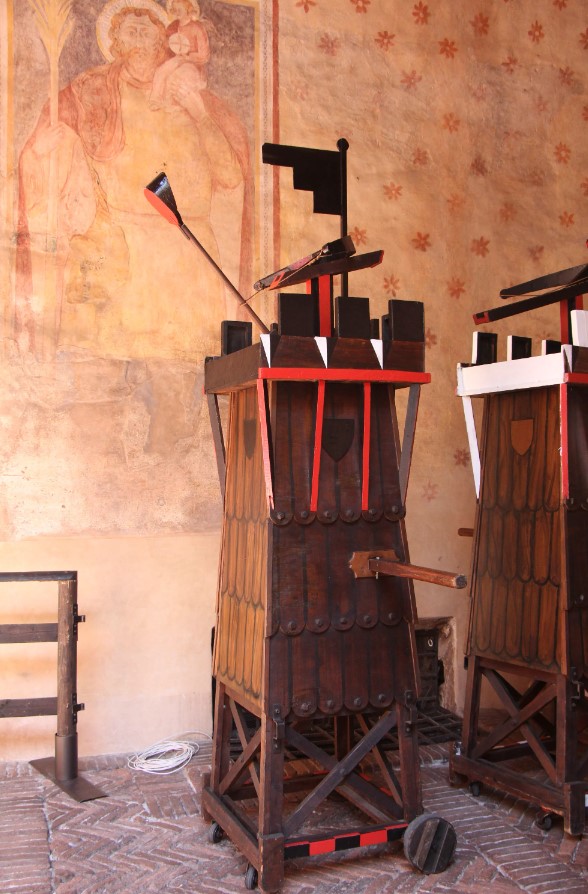 The remainder of the three hours each night is devoted to music, dancing and theatrical pageantry, with the scenario unfolding on the chessboard and explained in narration by several of the characters.

The winner of the game can get the girl for his bride, but the loser is allowed to marry the king’s other daughter, ensuring a happy ending for all. Then the sky explodes into a kaleidoscope of fireworks and a cascade of brilliant white illuminations cascades down the castle ramparts.

As crowds emerge from Piazza degli Scacchi for a glass of wine or local grappa at one of Marostica’s many bars and cafes, thoughts turn to the next edition of the Partita, in 2024. 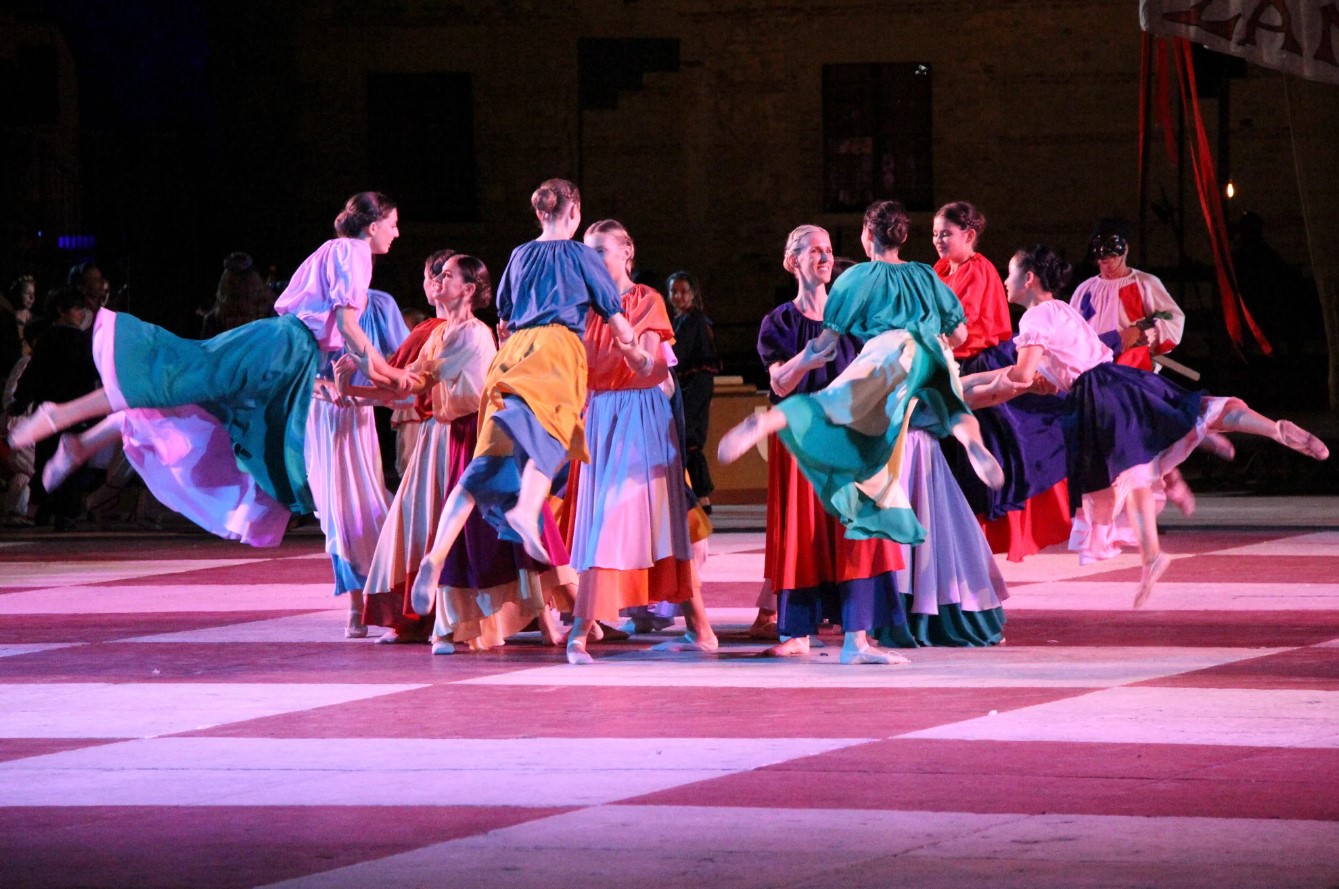 Hotels start being booked the day after La Partita closes, and the ticket office opens a full year in advance.

The town has only two hotels, so a visit to La Partita can be a great opportunity to stay in the surrounding countryside and discover some of the secrets of the Veneto region.

These include the Poli grappa distillery and museum, and the Maculan winery in Breganze, which has transformed local production from a bulk purchase into high-quality wine, with Maculan’s sweet white Torcolato now being sold worldwide. 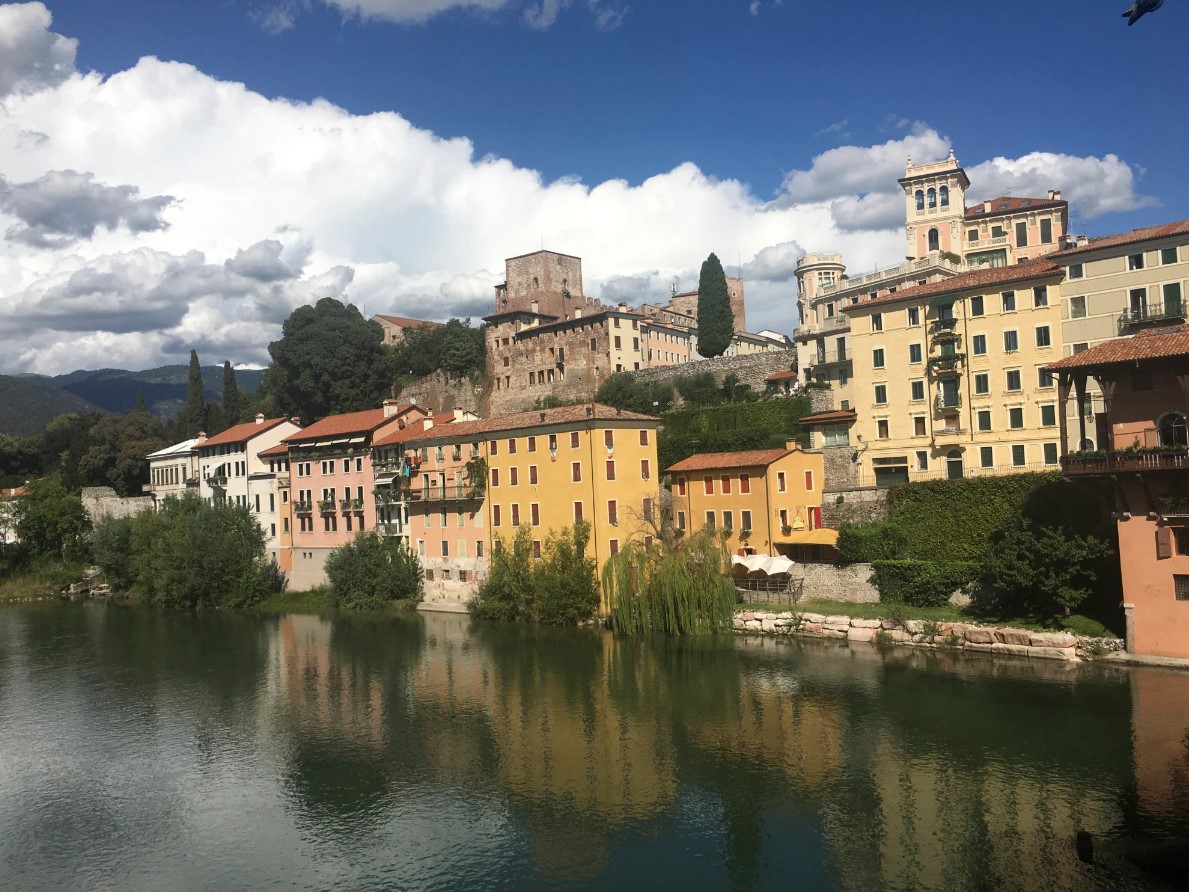 Bassano del Grappa is a town divided by the Brenta River, which descends from the imposing Monte Grappa, one of the most important First World War battle sites in Italy.

Crossing the river is the red wooden Ponte Vecchio bridge, which has a popular taverna at either end: the Taverna al Ponte and the Grapperia Nardini.

In the hilltop town of Asolo are the tastefully decorated 15th-century Villa Cipriani hotel with fantastic views, and Villa di Maser, a masterpiece by the Italian architect of the Renaissance Andrea Palladio. The current owner, Vittorio Dalle Ore, even makes his own Prosecco.

This article was first published in the South China Morning Post.

Cordae and Hit-Boy lead the board in their “Checkmate” video