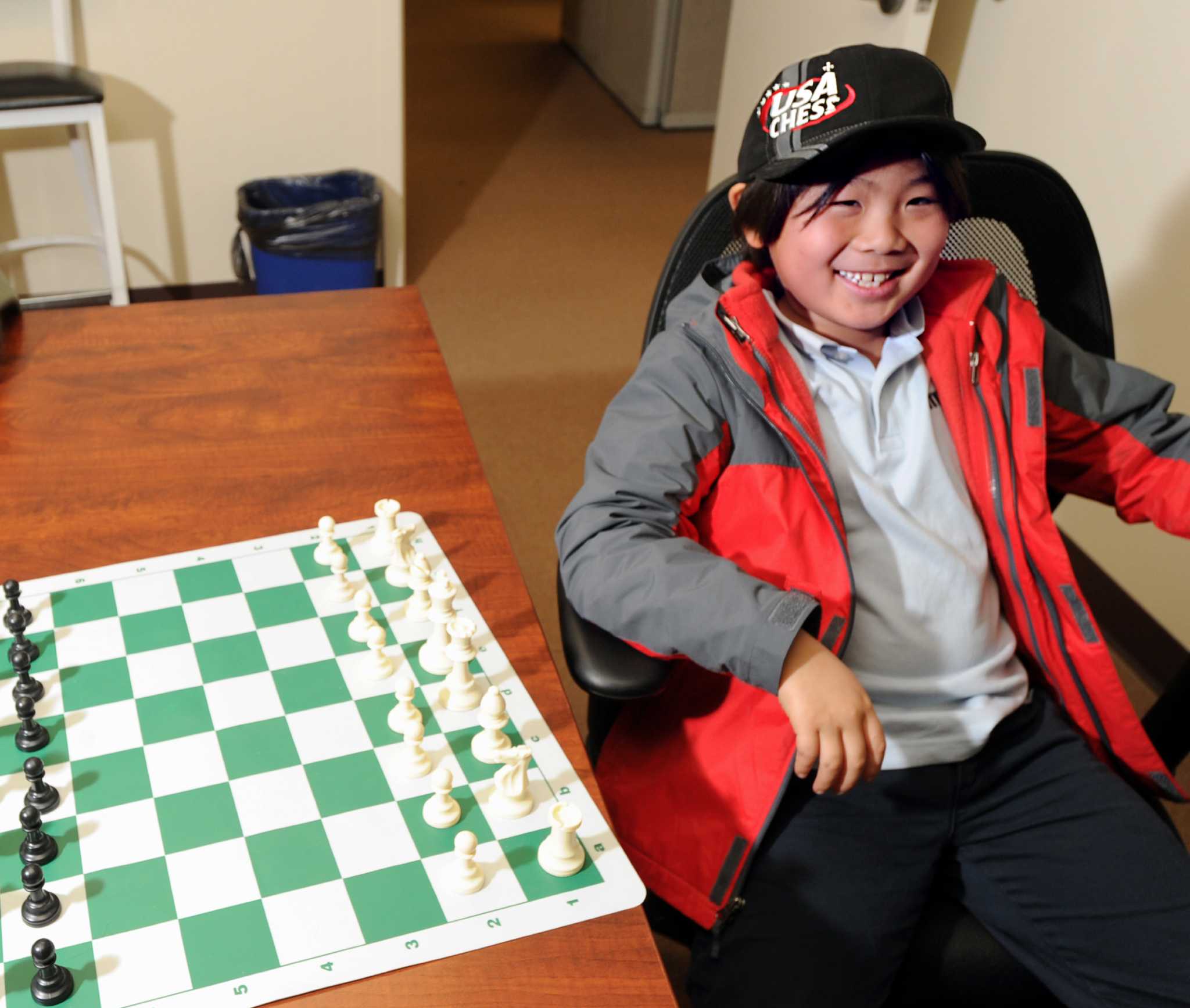 Maximillian “Max” Lu, of Greenwich, is an 8-year-old sophomore at Whitby School, and pretty much a typical kid. He plays basketball, tennis, soccer and baseball, and he skis and fencing. But a few years ago he embarked on a new activity – chess – and it became his passion. And he’s good. Like a world-class good.

In October 2013, he was the best player in this country for his age group. Then, in December, he was ranked fifth in the world after participating in the World Youth Chess Competition held in the United Arab Emirates. To learn more about Max’s chess affinity, Hearst Connecticut Newspapers spoke to him – and his father, David Lu.

Q: What fascinates you about the game?

Q: How did you learn to play?

M: I was playing after school, then I went to my first tournament and I lost.

D: We had a book – I was not a chess player – and we started to read it together. He started playing, playing against higher ranked kids, 11 and 12 years old. The only way to play better is to lose – that way you learn more. Every weekend there are tournaments. When a major tournament is approaching and it is playing against adults, sometimes we go to New York to play with higher ranked players. He averages 20 tournaments a year while many other top-ranked kids will play 50-70 a year.

Q: Do you play chess every day? How long?

M: I play 45 minutes to an hour a day. When a big tournament comes up, I play two hours a day.

D: He doesn’t watch videos or TV. Chess is a good substitute for video games. He will play online games that feature opponents. The only time he watches videos is before a big tournament. To mentally prepare for the fight at the Youth World Championships, he watched some inspiring videos on YouTube. His favorite was that of a competitive eater eating a seven-pound burrito in three minutes, as the eater showed determination not to stop.

Q: Who do you normally play chess with? Do you belong to chess clubs?

M: No. I play with friends and with my younger brother, Rex. He is in kindergarten.

D: He also plays chess in his head with his friends of equal level. As each square of the board has a letter and a number assigned to it, they will be called their first moves like this:

Q: Are you being asked to teach others how to play and do you enjoy doing it?

A: At school, I help other children play. I appreciate it a little.

Q: Do you have a favorite game of chess?

M: Any plastic kit will do.

D: Maybe her favorite board is the board in her head.

Q: Where have some of your tournaments taken you?

Q: When you play in these chess tournaments, how long is a game?

M: The games can last from two and a half to six hours. We mostly start at 4pm and can go until 7 or 9 if you are lucky or unlucky. After playing our matches, we are analyzed by the technical staff.

D: Parents are not allowed in the room. They want to be safe – to keep away any cheating.

Q: What are some of the challenges and benefits available in different contexts around the world?

M: The time difference. In Al Ain, I liked to see the camels. I liked the surf. At Christmas we went to Wadi Advenure, where they have a wave tank that makes waves in the water. We went on the subway to ride in driverless cars. And we went up to the Burj Khalifi and watched the fountain show.

Q: Can you tell us what was a highlight for you during the El Ain World Youth Competition?

D: He suffered a terrible loss in the fourth round of day four of the World Youth Chess Competition.

M: I was really crushed.

D: He came back to the game but ultimately lost it. When you come back to a game, you take your time, so as not to make another mistake. He played Game 5 right after that and rebounded mentally. He erased that last game from his mind. It was in Game 11 of Day 12 that he made a 7-8 move – a combination of sacrifice tactics – all forced.

M: If there was to be a draw, I would have been in the 10th or 15th. But I decided to win. It lasted four hours and everyone was watching it.

D: The match was broadcast. It was the last game of the best players to complete. Max wasn’t going to give up. The famous chess player Gary Kasparov was there and all the kids wanted his autograph. I wasn’t looking at Kasparov. I looked at Max.

M: I sacrificed my rook, my knight and a pawn for checkmate.

D: I could see that Max was going to win. His opponent could do nothing.

D: I clapped my hands and screamed. One of the coaches said it was one of the best games he has seen someone Max’s age play in his 18-year career. Max’s goal was to be in the top 30. If he had lost, he would have been ranked 20th or 25th. But he won and was ranked in fifth place.

Q: What’s next on your tournament list for 2014? Are you going to South Africa for the 2014 World Youth Chess Competition?

M: I don’t know. There is a major tournament in Dallas in May – the National Elementary Chess Championships. I won the North American Youth Competition in Toronto last year for the under 8s. They gave me a large silver mug – it’s in our living room.

Editor’s Note: Dad had one more piece of information to share. “Max enjoys playing poker as much if not more than chess,” he said, “but he will have to wait until he is 21 to participate in a real tournament.”