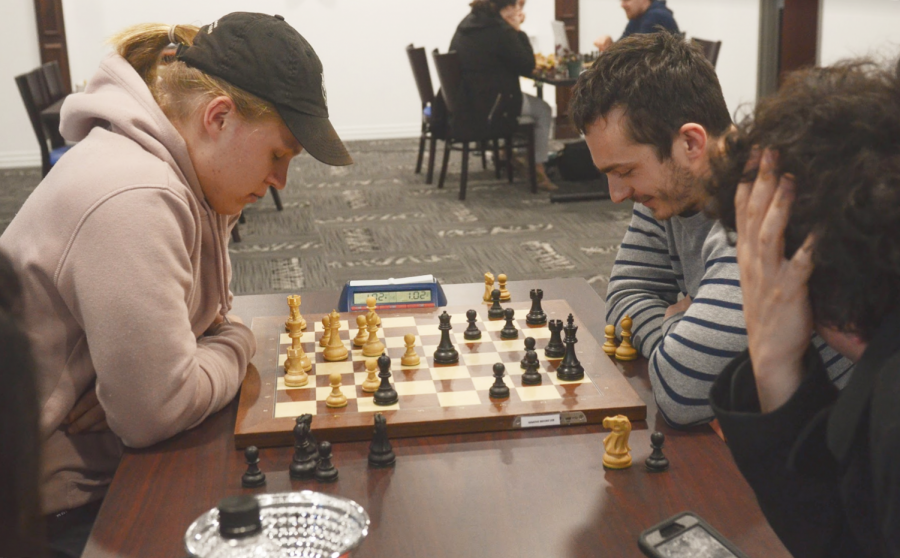 A Glimpse of SLU’s Chess Team – The University News

Many beginning chess players know a simple trick called “four-move checkmate” that quickly defeats the opponent in four simple moves. I know from personal experience that it doesn’t work against the grandmasters of the SLU chess team.

The SLU Chess Team hosted a get-together last Tuesday, April 10, as part of Atlas Week to expose other students to the world of chess.

Being such a small world, there aren’t many people who understand what the community is like. There are only about 1,400 people who hold the Grandmaster title, the highest level players can achieve. With such a small number of people in the world, Ramirez uses this to his advantage. He goes to tournaments and talks to players and coaches to get people into college.

That’s exactly what he did. In the past two years since the Chess Team began, SLU has selected a roster of seven players, all of whom are Grandmasters. The team, made up of five undergraduates and two graduate students, had remarkable success in the President’s Cup, known as the Chess Finals, with a third-place finish in 2017 and a fourth-place finish in 2018.

These successes do not come overnight. The players have been working their craft since they were children and all come from afar to pursue their studies and chess in what Cemil Can Ali Marandi calls “the chess capital of the world”. St. Louis is home to two top chess schools, SLU and Webster University, making it a great place for budding chess players.

As international students, many people would assume that moving to the United States would be difficult. For the chess team, it’s less difficult than you think.

“We have to go and play tournaments with other people,” said Francesco Rambaldi, the youngest player in the SLU squad. “We travel a lot, so we see a lot of other things.”

This is a common story among chess players; they have been traveling and competing since a young age. Like most college students, it’s hard for players to be away from their families for long periods of time, but their families are no strangers to busy schedules. Junior Dariusz Swiercz left his home in Poland, leaving his sister and parents to pursue higher education and master chess.

“It’s easier because we’re used to such situations,” Swiercz said. “Still, it’s difficult, because the distance is the whole Atlantic Ocean.”

SLU now has a chess facility that provides the team with adequate space and technology to meet and practice. As an individual sport, the team largely trains alone and players compete in individual tournaments. A lot of sustaining each other and other players comes from individual training. Players can target specific parts of their game and work to improve them.

“I analyze openings,” Rambaldi said. “The main part of studying openings is trying to get into positions your opponent didn’t expect.”

These small steps taken every day keep players sharp, so they can perform well as a team.
The team meets once a week in addition to their individual training by themselves and with Coach Ramirez. Ramirez says the team meeting is important because “they can still learn a lot from each other…because even though it’s an individual match, the team atmosphere is very important.”

The team performed well in its young age. Ramirez and all the players hope to improve in the last four next year and look to edge out local rival Webster.

Checkmate for the state; Murray’s Hereford continues the tradition of state chess champions in the family | Local News